The following is a financial report for Rust Belt Rust 2018 for anyone interested in what it takes to run a similar conference. There are many choices conference organizers have that impact budget, and we wanted to show what our choices cost as a data point for anyone considering running their own tech conference!

A bit of background on the conference:

We aim for the conference to be cost neutral. So how did we do?

Pretty much spot on!

The majority of our income came from ticket sales: 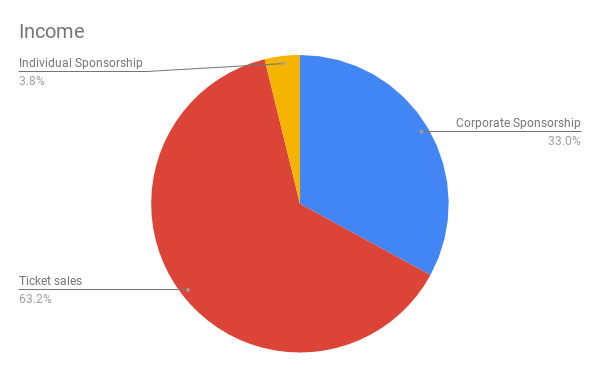 Individual sponsorships are people who opted to pay more than the listed ticket price to support the conference.

In addition to these items that have price tags attached to them, we also received many valuable in-kind donations:

As Rust corporate usage grows, I’d love to have more support from companies to be able to lower ticket prices and make the conference more accessible to more folks.

Explanation of the categories below: 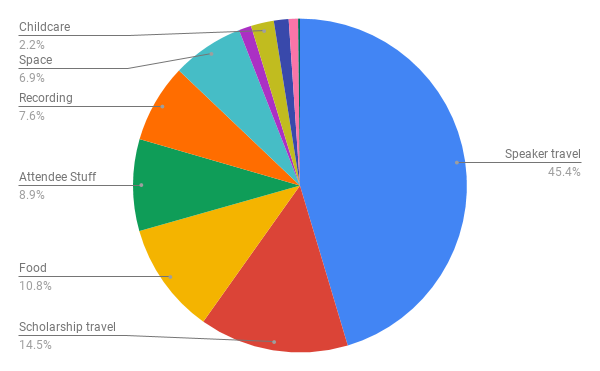 RBR pays for speakers’ transportation and hotel costs. This was, by far, our largest expense, but an important one! We’re honored to have folks from all over the world (as well as from the Rust Belt) willing to speak. A few speakers had employers willing to cover their travel cost, which is very helpful! I hope that increases as companies hire Rust developers and want to recruit more developers by having their employees speak at conferences. We don’t want to limit our speakers only to people who have those resources or personal resources for travel, so this will continue to be a large expense for us going forward.

We also awarded four diversity scholarships that cover transportation and hotel costs as well as a free ticket. Helping people who are underrepresented in tech become a part of the Rust community is important to us.

Another category to call out is food, which consisted of snacks, soda, tea, and a LOT of coffee, which weighed in at 10% of our budget. We don’t include meals and instead send everyone out for lunch on their own, which saves us what would be a huge expense for food that might not be the quality or type that all attendees enjoy– this way, everyone gets to make their own decision on what they eat. If you’re considering running a conference and decide to provide meals, be prepared to spend a LOT more on food than we did!

The space rental for our venue was also quite affordable, and the space we had available worked out really well for the workshops, single track, and unconference. However, the hotel’s location was a few miles outside of downtown Ann Arbor, which made going out to lunch and out in the evenings a bit more logistically tricky. I’ll probably be spending more for a more urban location next year.

A large expense that we didn’t have for RBR that I have had in the past for another conference I helped run is a party in the evening. While I enjoyed having one space where most attendees socialized between the two days of the conference, I think not having an official party is the right decision for Rust Belt Rust. We’ve had sponsors decide they wanted to hold an event; this year HealPay hosted a gathering, which was awesome!

If you’re considering running a Rust conference, or any tech conference, and have additional questions, please reach out!

Many thanks to Jean Lange for her help writing this up!